Coming up on the first full week of the Game a Day Challenge brought a new game type to the table, our first puzzle game.  There will without a doubt be several more brain-teasing games to come, but for the first I decided it was time to play through “A Virus Named TOM.”

The general premise is this:  In a futuristic world you play as a virus which was created by a genius who was recently fired from his job.  To get back at the corporation which laid him off he sends you into all the gadgets he’d invented under the company’s name so that you can cause havoc in retaliation.  So, yeah, you play a bad guy.

The art style is the first thing in A Virus Named TOM that stood out to me.  Everything is brightly colored and has great contrast to the dark background.  There is a heavy use of neon-like hues and drawn in an extremely charming cartoon style.  Playing the game just made me smile, which is odd when you think that: 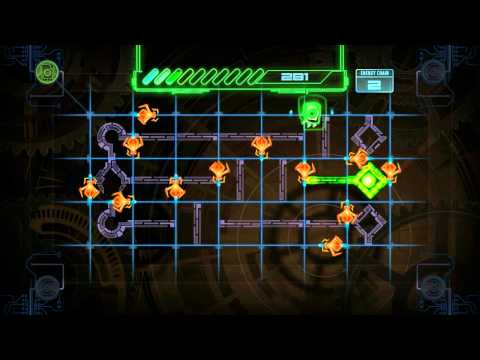 The gameplay is an improvement upon the old pipe games, removing the flow timer and adding enemies which need to be dodged.  I found the game to be easy to pick up and learn but also still challenging.  The pacing of skill requirement was excellent and I never felt as though the game had become boring or too easy.  There is also a multiplayer option in which you battle one another for viral supremacy, I did not get to try it, but I definitely will be in the near future.

The entire playthrough was rather short, maybe a couple hours, but I really enjoyed that time.  I would openly recommend A Virus Named TOM to all my friends and readers who love puzzle games.

What do you think? Cancel reply

For any questions or inquiries email us at: tieattack@gmail.com

For information about advertising, feel free to email us at: tieattack@gmail.com